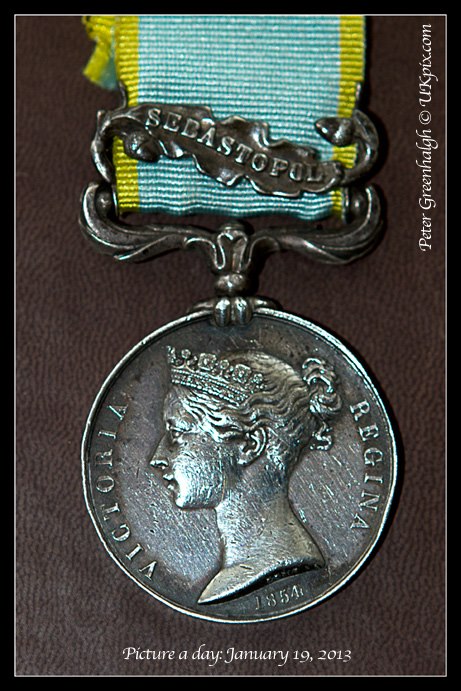 019: Saturday, January 19, 2013 – Crimean War Medal: The British Army records of Private Henry Fryer – number 3033 in Queen Victoria’s 77th Regiment of Foot – show that he was awarded the Crimean War Medal, with a clasp for Sebastopol, proving that he was at the siege of the city sometime between Sept 1854 and Sept 1855.

Seven years later, having been promoted to sergeant, he married my great, great grandmother (on my mother’s side) at a catholic chapel in Hazareebaugh (now Hazaribagh), West Bengal, India (I have the original certificate).

Margaret Mitchell, a 22-year-old lass from Dublin, had already been widowed twice – in less than four years. The other husbands were also sergeants in the 77th and she had to marry another to stay with the regiment – or find her way back to Ireland from Bengal.

And this pristine medal? I found it in a Brighton shop. Crimean War Medals were not officially engraved with the soldiers’ names and this one is blank. It is exactly right for Henry, clasp and all.

Although this medal is unlikely to be Henry’s, my mother’s family lived in Brighton after their travels with the Army, so you never know…